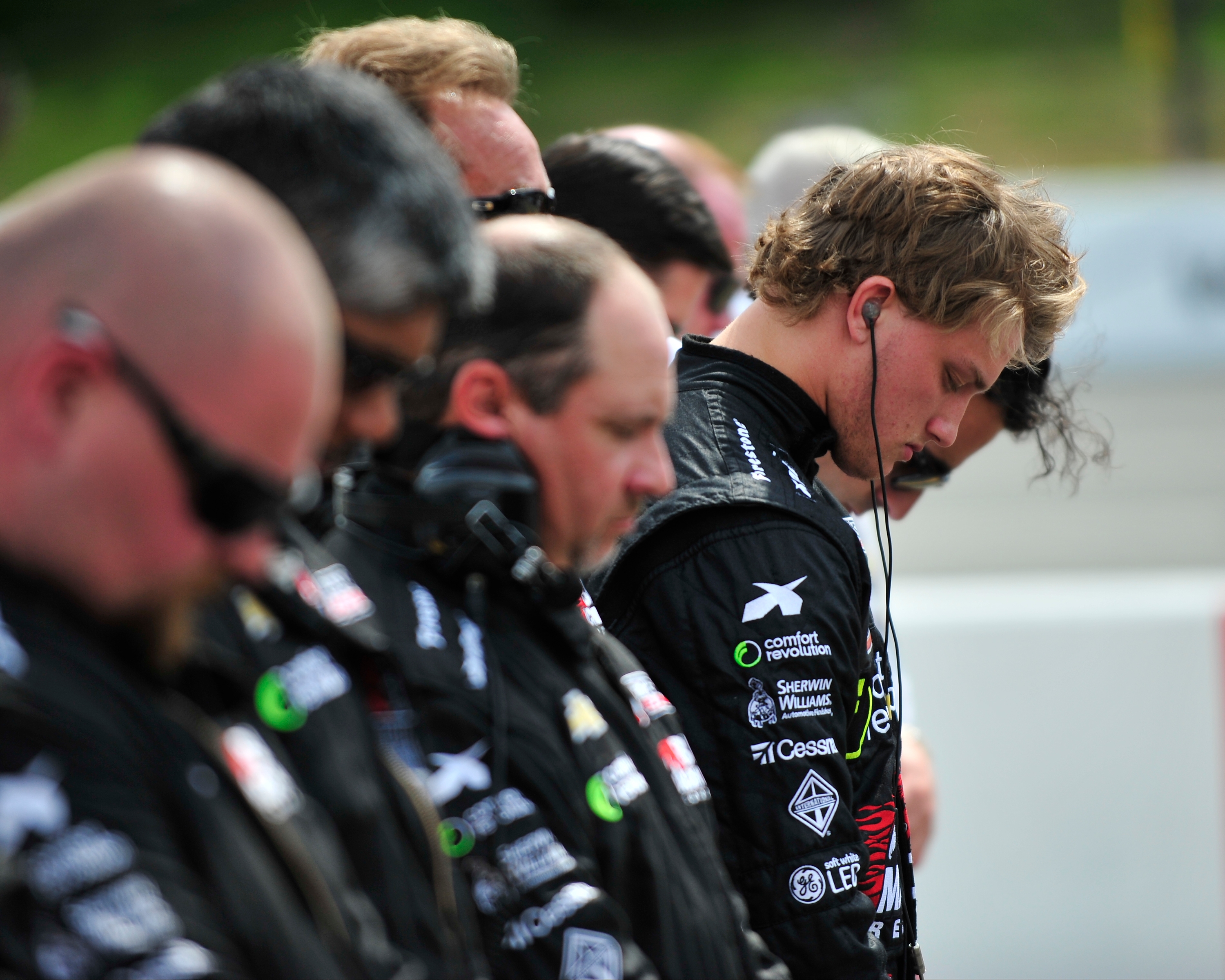 Sage Karam was injured in a crash on August 23rd, 2015, at Pocono Raceway in Long Pond. (Chris Post | lehighvalleylive.com)

I would be amiss if I didn’t throw down some comments on what I observed yesterday at Pocono Raceway. I am not a writer so pardon my babbling. These are the words of a photojournalist.

For the last two days I have been covering local IndyCar racer Sage Karam for The Express-Times and LehighValleylive.com, for me this was exciting as I had previously covered Sage when he wrestled in High School for the Nazareth Blue Eagles. 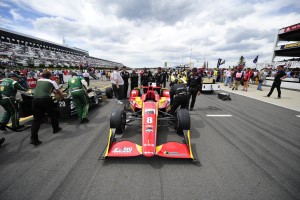 Over the past 48+ hours I have gotten to know Sage, his dad Jody, golden doodle Max, pit crew chief Ricky, PR manager Kelby and other members of his team. Thanks to Sage’s dad and Kelby I had awesome access to Sage in our attempt to do a profile of IndyCar’s newest rising star. 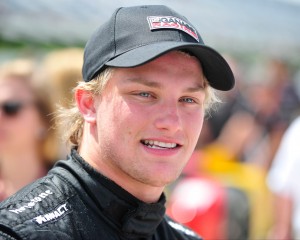 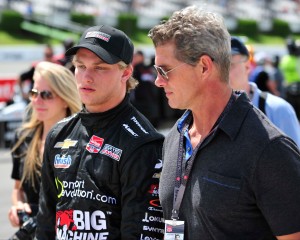 I felt a little paparazzi-ish following Sage and the team but I wanted to, my goal was to desperately tell a story that no one has done so thus far.. To show what it is like for them personally to be a part of a team, well beyond the story that we see on TV or in the pages of Sports Illustrated.

With my background of 20 years in public safety I personally know how important it is to work as a team and to be cohesive in your actions. The only way an IndyCar team wins races is to forget about your bloodlines, become a by proxy family and bond to the point of knowing each other, how they think and function. I saw this over my 48 hours with Sage and his team.

Saturday at Pocono Raceway was full of excitement; the Chip Ganassi team was pumped, really excited and also intensely focused on Sage’s car. They worked and fine-tuned his racecar with the utmost precision. Listening to his team on the scanner while they were running practice sessions and hearing the secret code of technical racecar lingo, it almost was like they had a sense between team members, they knew what the other was thinking before anyone said something. Saturday I had a chance to talk one on one with Sage in his trailer; he gave a heartfelt talk about what it was like to be racing at his home track

Sunday was full of patience, hurry up and wait! The crews appeared to be ready to go and very eager to get this event started. Soon enough the time would come that Sage first appeared on pit road. He was donned in his black fire suit and black team hat. Sage was introduced to the crowd at Pocono and made his way down from the platform and onto a military truck for a parade by the grandstand for the fans. 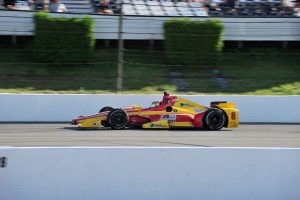 Sage Karam in the final lap moments before his crash. Sage Karam injured in a crash on August 23rd, 2015, at Pocono Raceway in Long Pond. (Chris Post | lehighvalleylive.com)

While all this was going on Scott, Sage’s team manager huddled up with the pit crew behind Car 8 in pit road. A few moments later Scott talked individually with Sage a few steps behind the crew grasping Sage’s hand with both of his, not like a boss but like a family member or a father figure. Sage then struck up a conversation with the pit crew, bouncing around and moving his arms in a windmill like fashion almost like he was gesturing.. “Let’s get this going already”. A quick handshake, man-hug and a few words with Nazareth neighbor Marco Andretti and it was race time. A prayer was read, Sage bowed his head along with the team, the national anthem was played and it was race time. A few moments later Jody Karam, Sage’s father stood by Sage as he put on his nomex hood and helmet, Sage climbed into his car.

I cleared out of pit road and made my way to turn two for the start of the race. The amazing view from this location closed to the public makes for a great location to photograph from, I have an unobstructed view from turn one to the leading edge of turn three. I spent about 20 minutes photographing here before I went back into the infield. 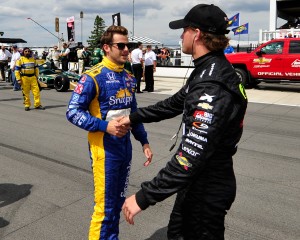 Having already talked it out with Ricky, Sage’s pit crew chief I found my way into a tiny pre-determined two-foot by two foot square space immediately next to the pit control booth where I would be until right after the crash. This is where I would make my images for about the next hour and a half.

It is truly amazing to watch a pit crew work; it is a mechanized symphony, a ballet of wrenches, pneumatic lifts, impact guns and hoses all working in harmony. Throughout all of this I kept eye contact with Ricky. After each pit stop I looked at him and he gave me a nod. Our agreement was that if I was in the way or I should move he would signal me. It was always a friendly nod and a crack of a smile from under his helmet. He is extremely accommodating allowing me and my cameras into this inner circle of racing at a very important event. Stops happened regularly due to the numerous crashes along Pocono Raceways tricky triangle. Sage would zip in, get fuel, new tires and be out in seconds. It was amazing to watch.

With about 30 laps left into the race members of the Chip Ganassi team started to gather around Sage’s pit located near the scoring tower. The flood of people wearing Chip Ganassi Racing hats and polo shirts was a testament to the “family” of racing. Family members, friends, sponsors and staff were there to see Sage win. The end of the race was nearing and this was most likely the final pit stop, immediately afterwards Ricky pulled out a tiny bag of Cheetos from his fire suit and was munching away, he smiled at me through his helmet opening and tipped the bag towards me as if to offer me one from across the pit. There were cheers when Sage pulled out of the pit with about two dozen laps to go. One person said to me “he could win this, how exciting at his home track”. 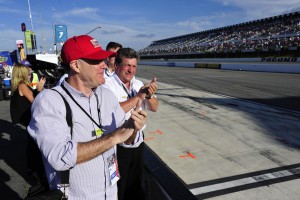 A few moments later the possibility of victory was turned into tragedy when Sage’s car lost traction outside of turn one forcing him into a spin resulting in a crash with the wall and debris all over the track. This joyous occasion in the pit that I have been observing turned to horror and disbelief. 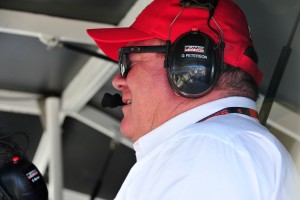 The look on Chip, Scott and Ricky’s face was stone cold. The penitent stare was chilling. Chip Ganassi through the side of his thick Oakley sunglasses closed his eyes and winced clenching his jaw. Scott the team manager places his hands over his face, closed his eyes, thumb on his temple and hung his head down. Ricky his crew chief in a state of disbelief pulled off his helmet and walked over to the NBC Sports monitor and watched the replay. The entire scene was surreal, from triumph to tragedy in 30 seconds.

The safety team was screaming over the track safety radio. I could hear them on my scanner into my earpiece asking about the medical helicopter, this was looking really bad. I didn’t want to end the story with this, I did fell however that I still had to continue to cover whatever the hell just happened. It was painful to watch this. I clicked my camera a few more times; made some more images of their expressions, a visual representation of what they were feeling inside. Where emotion was silent their expression said a thousand words. Shortly after the crash, his crew members picked up their gear bags and walked back to the garage trailers. At this time I had no idea of the injuries to Justin Wilson or even that there was a second car involved.

The crew went one way and I went another way to the infield medical area. There were other members of the media there already, I was the only photographer. The race would end under caution a few moments later; I still have no idea who won. While they were pushing a car into the winners circle, the Medevac helicopter was spinning up to take Justin Wilson to the trauma center. I overheard the IndyCar Chaplin talking on his cell phone and it seemed very grim for whomever it was they were flying out. 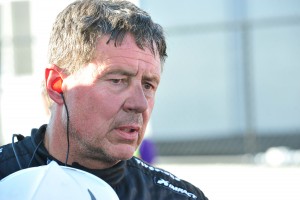 There was a steady stream of people coming up against a burly security guard manning the gate outside medical. Each had to explain who they were to gain entry; a cousin, Sage’s mom, Chip Ganassi and others. All very seriously concerned for what happened. This would go on for about another 30 minutes before I decided it was time to send in my images. Texting back and forth with the staff of The Express-Times a post was ready for the web page; all it needed was my images. I went to my truck to transmit. Looking out the windshield of my truck I noticed Sage’s white minibike outside the medical area gate. It most likely got there when Jody, Sage’s dad rode it there from the pits to meet up with Sage after the ambulance crew wheeled him in. It reminded me of seeing Sage zip around the grounds smiling the previous day.

Be the first to comment on "Sage Karam – Teamwork, Triumph & Tragedy in 30 seconds."