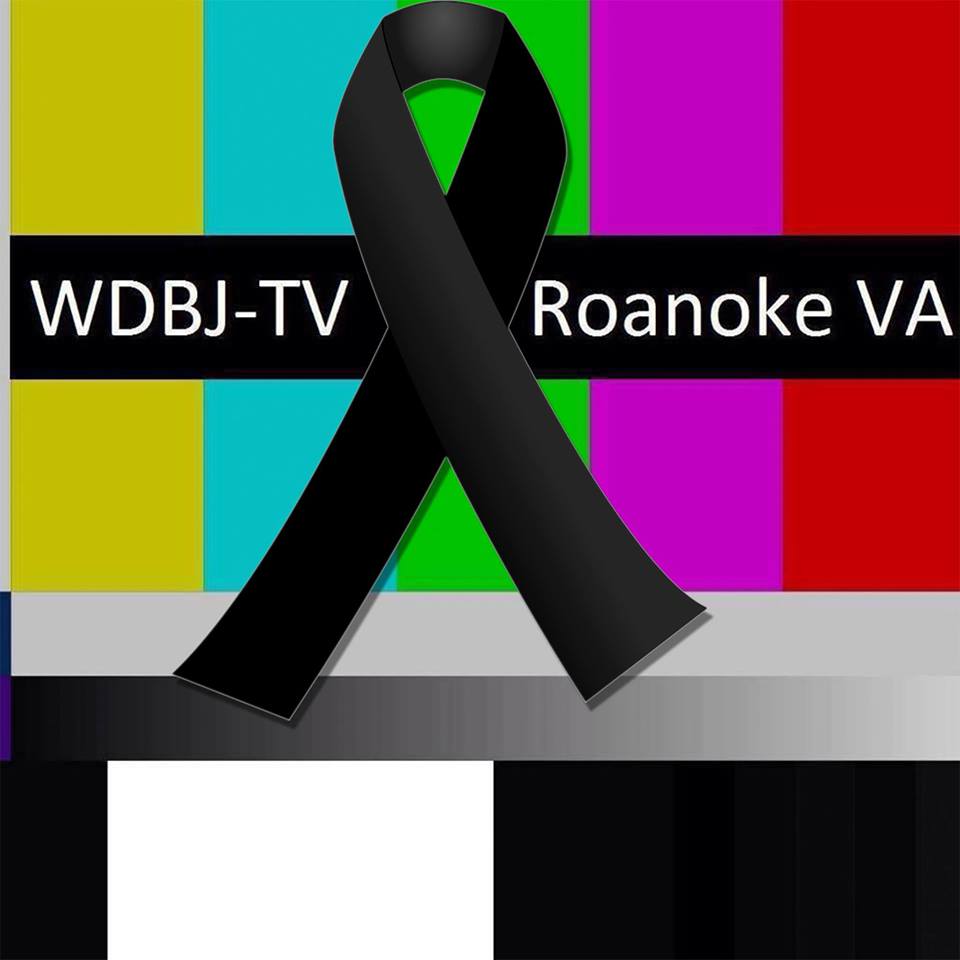 Situational Awareness in the profession of Journalism

UPDATE: Because of the popularity of this posting, I created a separate web page to inform and educate journalists on topics of safety. This is a topic I feel very passionate about and looking at the comments and web traffic, others do as well. This post will remain here but you can view an expanded version and additional content on a variety of topics by visiting www.JournalistSafety.com 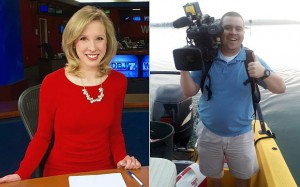 After the tragedy near Smith Mountain Lake in VA this morning with the crew from WDBJ CBS-7 I can’t even begin to stress how important our safety is when we work in the field.

In my line of work as a photojournalist, I am also a safety educator teaching for a college. I look at what happened and help people understand what they can do to protect themselves from it happening to them.

I watched the video the shooter posted on social media for just this purpose; to learn what happened and to help protect others. I will not re-post it and i will not share graphic details but i will post a short blog entry about what we can do to proactively prevent it.

There is a tactic, a strategy we teach in public safety and it certainly has applicability to what journalist do called “situational awareness” that’s what my commentary will be focused on.

Again, these are some tidbits of information that i hope you can use to understand a bit more about what Situational Awareness is and how you can use it in your jobs.

Everywhere I go I am always looking for things that based on my training are odd or out-of-place. Yesterday I noticed a young man walking into a public facility, it was 85 degrees outside and he was wearing a hoodie and jeans, not normal attire for that kind of weather, i watched him for a few moments and deemed him not a threat. This is on all the time in my head, I wish i could turn this off  but assessing my environment like this has kept me safe for a very long time but still allowed me to do my job.

I hope some of this can help you individually to be safer in your jobs.

WARNING: There is one screen grab in this post that shows a handgun being pointed at the female journalist. I felt it was important to include here to make my point about being aware of your surroundings and what happens when there is a loss of situational awareness and gain tunnel vision.

NOTE: Some of this material comes from different open source documents, most are my own words.

Textbooks, pamphlets, websites and lectures define situational awareness saying it can be gained by generally keeping tabs on your surroundings — “checking your six”, “keeping your back to the wall” and “having your head on a swivel”

This definition isn’t wrong. That’s exactly what situational awareness is: knowing what’s going on by scanning your environment. But I always found this explanation lacking. What exactly are we looking for? How do I know if I’m paying attention to the right things? Are their behaviors or warning signs of an imminent threat that I should know about?

Situational Awareness is the ability to identify, process, and comprehend the critical elements of information about what is happening. More simply, its knowing what is going on around you. 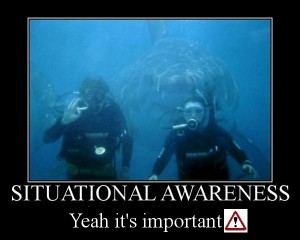 Find Yourself in CONDITION YELLOW

• Past Experiences: We act on information based on our knowledge. When something looks similar to what we are familiar with, we may react as if it were the same.

• Expectations: We interpret information in such a way that it affirms the planned action. We may rationalize but when in reality no one has done anything to correct errors.

• Filters: We are provided with information, but we don’t use it. We don’t pay attention to information that doesn’t match our mental picture.

In the case of the ABC 7 shooter, from the video he posted on Facebook, the gunman was within 6 feet of the victims for nearly 30 seconds with the handgun pointed towards the victims at arm’s length. I am sure he was there for a longer amount of time, but the video showed 35 seconds and that is all I can comment on.

Did anyone even see him? Did someone see him and not consider it odd that in the early morning hours, someone besides the news crew and a representative of the park were there?

A gut feeling that things are not right. This clue is one of the most reliable because the body is able to detect stimulus long before we have consciously put it all together. Trust your feelings! 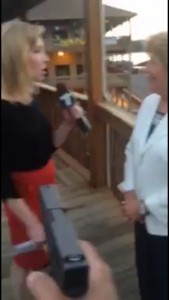 Assuming everything is under control affects vigilance. When things are slow, tasks are routine, and/or when our objectives have been achieved, complacency can occur. Challenging yourself and/or the team to be prepared for contingencies (e.g. planning or training) can deter complacency.

How does your agency or station prepare to cover a storm like a blizzard or a hurricane? what mindset does that place you in to think of the possibilities? this is the mindset we should always be operating on.

We sometimes are susceptible to what is called “tunnel vision” we lose situational awareness and are focused on only what is right in front of us. 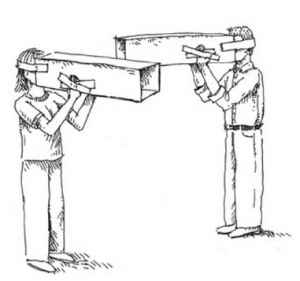 Put yourself in a position for optimal observation. To optimize situational awareness, you need to be able to see as much of your surroundings as possible. Positioning yourself in obstructed spots will inhibit the flow of information coming in. For example, something might be in your way that prevents you from seeing a person enter a theater or restaurant. You also don’t have eyeballs in the back of your head, so you can’t see what’s going on behind you. Standing with your back to traffic while doing a live shot along a major highway is a bad idea!

If any of you have ever gone to the pub with me you may notice i never sit with my back towards the door.. In fact if you know ANYONE who was ever prior military or public safety they most likely do this technique as well. You don’t know what you can’t see. Position optimally for observation, a state of Relaxed Alertness.

Distinct behaviors and traits to look for

Dominance/submissive behavior. Generally, most people try to get along with others, so for the most part people act in accommodating and submissive ways. Van Horne writes that dominant behavior “is an expression of the limbic system’s fight response” and often manifests itself in “gestures and postures that make a person look larger to intimidate ‘smaller’ individuals into submission.” Smaller vs. bigger here doesn’t just apply to physical size, however, but also relates to relative positions of power.

Because most people get along to get along, dominant behavior often constitutes an anomaly, and the person displaying it deserves more attention. If someone acts in a pushy, authoritative, or overbearing way, it doesn’t necessarily mean they’re a threat; context matters. You’d expect a boss to act dominant in relation to their employees and the employees to act submissive to their boss, but seeing extreme dominant behavior exhibited by a customer towards an employee isn’t as common. That’s something to keep an eye on.

Comfortable/uncomfortable behavior. Most people are going to look relatively comfortable in most situations. Think about a bus or a subway ride — passengers generally appear pretty relaxed while they stare out the window or read a book. If someone looks uncomfortable, that’s an anomaly that warrants extra attention, but it doesn’t mean they’re necessarily a threat. They could be distressed because they’re late for work or maybe they just heard some bad news about a relative. Again, it’s just something to keep your eye on.

This is when a person looks over their shoulder to see what’s behind them or generally scans their surroundings. People who are comfortable generally don’t do this because they don’t feel any threat. So if you see a guy looking over his shoulder a lot when he should be standing there aloof, that’s an anomaly that should get your attention.

Now obviously, “checking your six” is something that situationally aware good guys do too. If you’re doing it right, it shouldn’t be noticeable to others, but it takes practice, and some guy with his head on a swivel might still be green. But until you verify that through further observation, be suspicious.

On the flip side, someone acting comfortable when everyone else is uncomfortable would be an anomaly. One of the ways law enforcement was able to identify the Boston Marathon bombers was that they noticed in surveillance footage that the men looked relatively calm while everyone else was running around in a panic. The reason they looked calm was because they knew the explosion was going to happen and thus weren’t surprised by it, while everyone else was caught off guard. 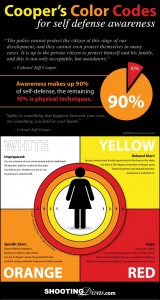 If anyone would like to ask a question or discuss this off line, Please feel free to find me on Facebook or email / call directly.

I hope this helps,

1 Comment on "Situational Awareness in the profession of Journalism"